The Transformation of SoMa: Central and Western SoMa Plans

The Transformation of SoMa: Central and Western SoMa Plans

San Francisco’s South of Market district is a unique patchwork of commercial retail, office space, bars, restaurants, and light industrial space with a character all its own. The neighborhood has seen substantial growth in the past few years, with major tech companies setting up headquarters in the once-industrial district. A comprehensive rezoning effort called the Central SoMa Plan has just been approved, and another called the Western SoMa Plan is being analyzed by the Environmental Impact Report board (EIR) to help the growing neighborhood address its housing and transit concerns.

On a broad level, the plans call for a total of 13 sub-projects across SoMa that will create a sustainable, modern neighborhood, with importance placed on affordable housing options. The recently completed Transbay Terminal project and the soon-to-be completed Central Subway project will bring a new level of accessibility to the area, so infrastructure improvements are vital for positive growth to occur. As many as 32,000 new jobs are expected to be created as a result of the project with an estimated 8,550 new homes built by 2040.

Along with street layout changes and the addition of major retailers (like the 55,000 square foot Whole Foods location at the new Mid-Market development, Trinity Place) the most notable change to the neighborhood will be the removal of height restrictions on several large parcels of previously industrial or office-zoned land. New height limits will increase the maximum building height north of Harrison Street between 2nd and 3rd Streets from 130 to 200 ft.; south of Harrison from 85 to 350 ft.; and south of Bryant between 4th and 6th Streets from 85 to 400 ft.

Two major aspects of the rezoning will be the Folsom-Howard street plan and Western SoMa plan. These projects aim to create a “Civic Boulevard” though SoMa – a main transportation pavilion connecting diverse communities to each other and to the rest of the city. Safe, modern street environments are the end goal, with more efficient transit layouts, new parks and parklets, and more desirable land parcels for future mixed-use buildings. 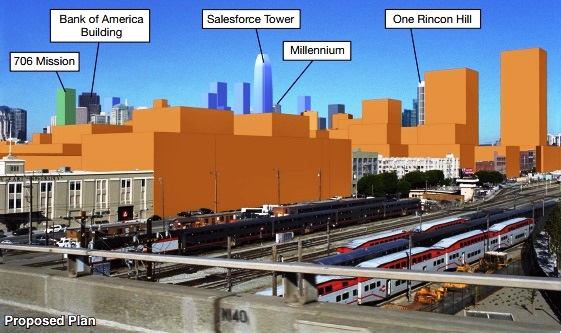